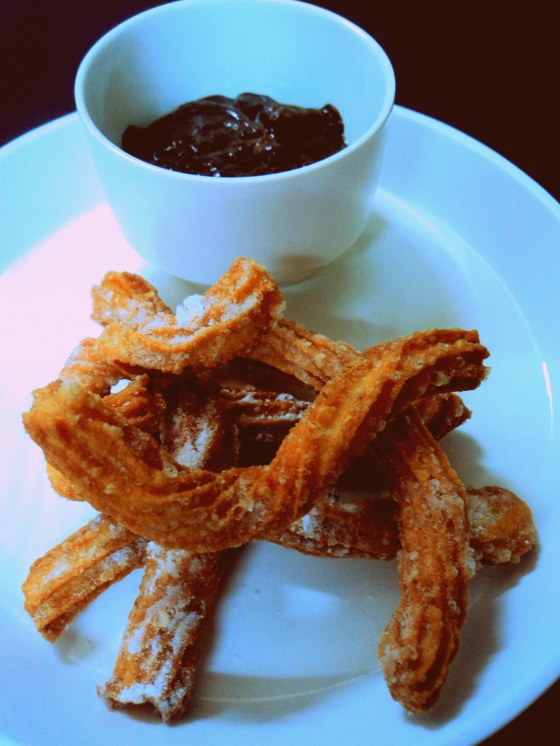 Unless you are willing to settle for an apple, there is no such thing as a healthy dessert. But surely there are numerous ways in which you can cut down on your dessert’s calories.

One such trick is to replace refined flour with whole wheat. While both the ingredients work flawlessly as bases for simple desserts such as tea cakes, sweet breads and mud cakes, it gets complex if daredevilry is on your mind.

When it comes to bakes such as croissants, éclairs, soufflés and other French-sounding names, whole wheat doesn’t work as well as refined flour. This is because with fine flour, an impeccable buttery, flaky exterior or a moist interior is guaranteed, but with whole wheat, the bake turns out tad bit denser than then usual.

Thankfully, when it comes to churros, whole wheat seems work equally well. Also known as Spanish doughnuts, churros are long pipes made using a combination of flour, water and yeast. The technique to make them is very similar to a Maharashtraian snack known as chakli.

To make them, the batter is filled in a piping bag topped with a star-shaped nozzle. The paste is squeezed out in hot oil and fried to obtain crisp, brown, rigged pipes that are dusted with sugar and cinnamon before serving. The dessert is ideally chomped with  a generous helping of molten chocolate sauce.

My churros are healthier than traditional ones. Since eating fried food in itself is a guilty ride, I thought swapping flours would make it a comfortable one.

I’ve teamed the tubes with a hot chocolate sauce that has been spiked with a touch of orange zest and fleur de sel. While the former addition adds fragrance and fruitiness to the dense sauce, the latter helps in offsetting the sweetness of chocolate. END_OF_DOCUMENT_TOKEN_TO_BE_REPLACED

My mother insists on breakfast and I insist on a yummy breakfast. While flipping pancakes and waffles is a weekend affair in my household, on a weekday morning, I try to rustle up easy delights.

My ideal breakfast treat is the one that cheers me up when Monday morning blues need to be battled.  It should make me rise and shine and fill me up with energy enough to accompany Spiderman on his next expedition.

If you ask me more, I’ll say it should go well with my cup of milky-masalewali chai, hot chocolate, fruit juice, yogurt smoothie or whatever my choice of drink is on that particular day. It should be convenient to stock and easy to make as well.

Once such creation is the oat and chocolate bar. Filled with the goodness of oats, dry fruits, healthy seeds and coconut powder, the bars ooze chocolate and their sugar content is just enough to pep me up for the day to come.

I’ve called them Monday morning chocolate and oat bars because I promise they will brighten up the toughest seeming weekday for you. END_OF_DOCUMENT_TOKEN_TO_BE_REPLACED 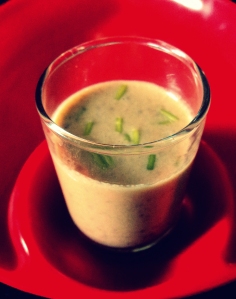 I like soups. All kinds of them – thick and creamy, clear and runny, hot or cold.  But what I like even better, are soups that come in small sizes.

A fat, inviting bowl that ruins my appetite for main course, doesn’t go down well with me. Especially since most broths play with one or two core flavours, a bowlful of repeated exposure is not my idea of savouring soup.

What I personally favour are soup shots. Small cups of goodness that warm up the belly from inside and make way for good food to it fill it up.

The fried eggplant cappuccino is one such soup.

It works perfectly when served in small doses. You sip, indulge in its flavour, gulp and stop at that.

END_OF_DOCUMENT_TOKEN_TO_BE_REPLACED

Vegetarian main course dishes that go beyond plated carbs, impress me a lot. While most Indian and international cuisines have an exhaustive array of appetizers, salads and soups that can be made using vegetables only, when it comes to mains, the options are often restricting. If you don’t believe me, thumb through any restaurant menu and you will see how your choices will be restricted to pasta, rice and potato-based dishes.

As a vegetarian cook, I admire roasts. Roasts are wholesome and fit perfectly into my idea of main course meals. I miss having an easy main course-friendly ingredient that can be roasted into a glorious brown, be dressed in a glimmering sauce and served just like that.

My answer to a non-vegetarian roasts, is this cottage cheese ‘steak’.  END_OF_DOCUMENT_TOKEN_TO_BE_REPLACED

I cannot think of a better way to beat heat than with a crunchy, cool slab of watermelon. While I spent last season guzzling down glasses of watermelon and mint nectar, the year before I was high on watermelon and cumin curry.  These days,  I have found a slightly more glamorous way to bring down the mercury.

The vanilla-scented goat cheese custard served with batons of fresh watermelon, is my take on the classic goat cheese and melon salad. I have always been amused by the way watermelon’s fresh juiciness gushes right into the exotic sour crumbliness of goat cheese. How effortlessly exotic.

Method
Simmer milk, sugar and vanilla extract for 5 minutes, stirring continuously. Remove from fire and let it cool.
In a blender, mix goat cheese with vanilla-scented milk and grind it into a fine puree.
Pour the mixture in greased ramekins and bake at 150 degree Celsius for 25 minutes.
Remove from the oven and refrigerate it for 2 hours.
Top it with fresh watermelon pieces and serve.

Summer has hit my city and I have to do something about it. While I am busy chasing  UV rays with heaps of sunscreen in another universe, on my blog I will do it with lots and lots of sorbet.

Sorbets remind me of a childhood treat known as ‘gola’. Sorbets charm me with their beautiful icy texture. Sorbets come in tangy flavours that make my lips pucker à la Jolie. And sorbets manage to rouse the most innocuous-seeming cavity. Lucky for my dentist.

Here is one for my afternoon hero. END_OF_DOCUMENT_TOKEN_TO_BE_REPLACED

Gourmet food stores make my heart melt. The reaction at spotting one is similar to what shopaholics experience at the sight of the word ‘sale’. I rush inside and grab a whole lot of things I know nothing about.

At a recent trip, I bagged a box of charcoal crackers. The way dill crackers are laced with dill and chive with chives, these are flavoured with a small percentage of charcoal powder.

The salty, slim sheets are stark black in colour and have a carbony bite.  Their texture is similar to a pie shell – brittle and crumbly.

Though the crackers went miraculously well with blobs of brie, I couldn’t resist this little adventure. END_OF_DOCUMENT_TOKEN_TO_BE_REPLACED

As a child I was squeamish about eating them. Several people told me about several benefits, but I was stubborn. I didn’t like the way they were so squishy and full of seeds. Until one day a dish called Moussaka converted me for good.  But that is a story for another day.

Ever since I got hooked on to eggplants, I’ve been cooking them in different ways. Today, I fried and served the chips with a savoury mousse made out of yellow peppers.

END_OF_DOCUMENT_TOKEN_TO_BE_REPLACED

Lemon and cream spaghetti with basil and chilli chutney

When I first heard about spaghetti al limone, I couldn’t bring the two flavours together in my head.  Since I usually like my pasta mild and easy, this combination got me cooking.

The role of bringing an edge to a pasta dish is mostly played by an herb or a sharp cheese, but using lemons provided a refreshing change.

To keep the dish from going hideously citrusy, I cut the flavours with a sweet and hot, basil-chilli chutney.

Lazy cooks, the sauce is almost no-cook, so it is perfect to stock in jars. END_OF_DOCUMENT_TOKEN_TO_BE_REPLACED

Chocolate blends with sea salt like Avril Lavigne and her high notes. Be it dark or sweet – salt cuts through the saccharinity in a way that it is hard to tell. The key is to use just a sprinkle, not going overboard and staying on the edge – for an edgy taste.

Today, I used a pinch of sea salt to spruce up my regular chocolate ganache. Unlike refined salt, sea salt leaves a  heavy, rustic taste when combined with chocolate.

The rest of the cupcake is infused with mild flavours such as vanilla and rose water. END_OF_DOCUMENT_TOKEN_TO_BE_REPLACED